MFBTY (My Fans Better Than Yours) is a Korean hip-hop group consisting of Korean hip-hop legend, Drunken Tiger/Tiger JK, Yoon Mi-rae, and Bizzy. They debuted in 2013, and have one official mini album. However, the group was absorbed into the Drunken Tiger name in August 2013, and have one album under this name. In December 2014, they were again rebranded as YoonMiRae Ft. Tiger JK & Bizzy. While they are referred to three separate acts in most appearances, they are still colloquially known by fans as MFBTY. 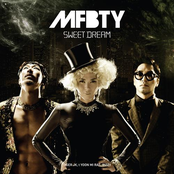